The conception of four castes and four orders of life, as planned by the Lord Himself (Bg. 4.13), is to accelerate transcendental qualities of the individual person so that he may gradually realize his spiritual identity and thus act accordingly to get free from material bondage, or conditional life. In almost all the Purāṇas the subject matter is described in the same spirit, and so also in the Mahābhārata it is more elaborately described by Bhīṣmadeva in the Śānti-parva, beginning from the Sixtieth Chapter. 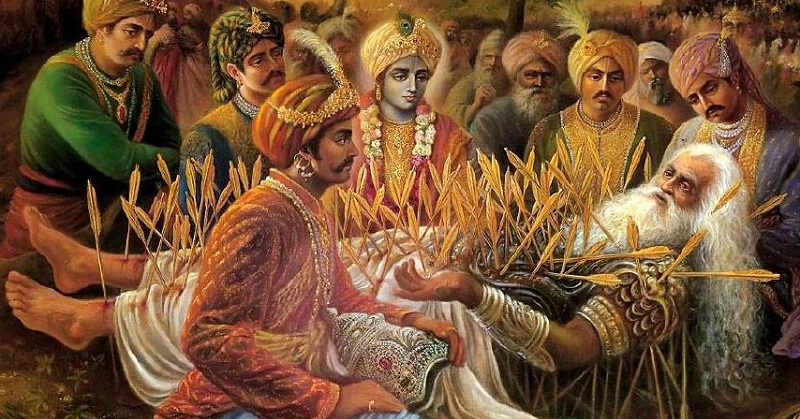 The varṇāśrama-dharma is prescribed for the civilized human being just to train him to successfully terminate human life. Self-realization is distinguished from the life of the lower animals engaged in eating, sleeping, fearing and mating. Bhīṣmadeva advised for all human beings nine qualifications:

One cannot be called a civilized person without acquiring the above-mentioned preliminary qualities.

Besides these, the brāhmaṇas (the intelligent men), the administrative men, the mercantile community and the laborer class must acquire special qualities in terms of occupational duties mentioned in all the Vedic scriptures. For the intelligent men, controlling the senses is the most essential qualification. It is the basis of morality. Sex indulgence even with a legitimate wife must also be controlled, and thereby family control will automatically follow. An intelligent man abuses his great qualifications if he does not follow the Vedic way of life. This means he must seriously make a study of the Vedic literatures, especially of the Śrīmad-Bhāgavatam and the Bhagavad-gītā. For learning Vedic knowledge, one must approach a person who is cent-percent engaged in devotional service. He must not do things which are forbidden in the śāstras. A person cannot be a teacher if he drinks or smokes. In the modern system of education the teacher’s academic qualification is taken into consideration without evaluation of his moral life. Therefore, the result of education is misuse of high intelligence in so many ways.

The kṣatriya, the member of the administrative class, is especially advised to give charity and not to accept charity in any circumstances. Modern administrators raise subscriptions for some political functions, but never give charity to the citizens in any state function. It is just the reverse in the injunctions of the śāstras. The administrative class must be well versed in the śāstras, but must not take to the profession of teachers. The administrators should never pretend to become nonviolent and thereby go to hell. When Arjuna wanted to become a nonviolent coward on the Battlefield of Kurukṣetra, he was severely chastised by Lord Kṛṣṇa. The Lord degraded Arjuna at that time to the status of an uncivilized man for his avowed acceptance of the cult of nonviolence. The administrative class must be personally trained in military education. Cowards should not be elevated to the presidential throne by dint of numerical votes only. The monarchs were all chivalrous personalities, and therefore monarchy should be maintained provided the monarch is regularly trained in the occupational duties of a king. In fighting, the king or the president should never return home without being hurt by the enemy. The so-called king of today never visits the warfield. He is very much expert in artificially encouraging the fighting strength in the hope of false national prestige. As soon as the administrative class is turned into a gang of mercantile and laborer men, the whole machinery of government becomes polluted.

The vaiśyas, the members of the mercantile communities, are especially advised to protect the cows. Cow protection means increasing the milk productions, namely curd and butter. Agriculture and distribution of the foodstuff are the primary duties of the mercantile community backed by education in Vedic knowledge and trained to give in charity. As the kṣatriyas were given charge of the protection of the citizens, vaiśyas were given the charge of the protection of animals. Animals are never meant to be killed. Killing of animals is a symptom of barbarian society. For a human being, agricultural produce, fruits and milk are sufficient and compatible foodstuffs. The human society should give more attention to animal protection. The productive energy of the laborer is misused when he is occupied by industrial enterprises. Industry of various types cannot produce the essential needs of man, namely rice, wheat, grains, milk, fruits and vegetables. The production of machines and machine tools increases the artificial living fashion of a class of vested interests and keeps thousands of men in starvation and unrest. This should not be the standard of civilization.

The śūdra class is less intelligent and should have no independence. They are meant for rendering sincere service to the three higher sections of the society. The śūdra class can attain all comforts of life simply by rendering service to the higher classes. It is especially enjoined that a śūdra should never bank money. As soon as the śūdras accumulate wealth, it will be misused for sinful activities in wine, women and gambling. Wine, women and gambling indicate that the population is degraded to less than śūdra quality. The higher castes should always look after the maintenance of the śūdras, and they should provide them with old and used garments. A śūdra should not leave his master when the master is old and invalid, and the master should keep the servants satisfied in all respects. The śūdras must first of all be satisfied by sumptuous food and clothing before any sacrifice is performed. In this age so many functions are held by spending millions, but the poor laborer is not sumptuously fed or given charity, clothing, etc. The laborers are thus dissatisfied, and so they make agitation.

The varṇas are, so to speak, classifications of different occupations, and āśrama-dharma is gradual progress on the path of self-realization. Both are interrelated, and one is dependent on the other. The main purpose of āśrama-dharma is to awaken knowledge and detachment. The brahmacārī-āśrama is the training ground for the prospective candidates. In this āśrama it is instructed that this material world is not actually the home of the living being. The conditioned souls under material bondage are prisoners of matter, and therefore self-realization is the ultimate aim of life. The whole system of āśrama-dharma is a means to detachment. One who fails to assimilate this spirit of detachment is allowed to enter into family life with the same spirit of detachment. Therefore, one who attains detachment may at once adopt the fourth order, namely renounced, and thus live on charity only, not to accumulate wealth, but just to keep body and soul together for ultimate realization. Household life is for one who is attached, and the vānaprastha and sannyāsa orders of life are for those who are detached from material life. The brahmacārī-āśrama is especially meant for training both the attached and detached.